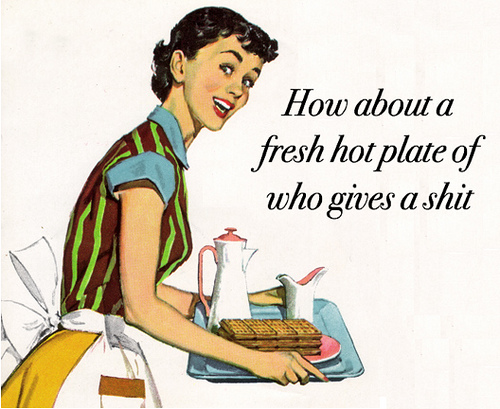 You don’t know ANY of the Top 40 tunes these days. Hang on, is there even such a thing as the ‘Top 40’ anymore? By even using the phrase ‘Top 40’ are you revealing what an old-person-square-bear you are?

You have to apologetically keep asking your eye-rolling 12 year old ‘So who’s this then?’ as you listen to the tinny noise coming out of Capital Radio.

The oldies may have said it to you about the New Romantics back in the 80’s, but really, this does all sound the same.

You’re embarrassed in front of your own kids.

But then you give up trying to like Drake, and you whack on the dulcet tones of Morrissey telling you that everyday is like Sunday.

And what’s more, you decide to dump an even bigger dollop of f*ck it sauce on to the situation and get Deacon Blue to sing Dignity, because clearly in the eyes of the Millennials you have none, but who cares because you’re in your happy place.

And this is proper music.

So who gives a flying…

You’re happily watching the Kardashians on TV frolic around with their plumped up lips, bums, and contoured faces, when you decide to play the ‘Who am I most like?’ game in your head.

This is fun. You used to play this with the cast of Crossroads after all.

Could it be Kim with her pouty selfie face and crazy, wannabe president husband?

Or Khloe with her Amazonian body and ridiculous curves?

Or Kourtney – perhaps the most normal of the gang – and if you had a full time makeup team on hand 24/7 you could possibly, maybe look a teeny weeny bit like her (after a colonic irrigation).

But then it dawns on you that it’s none of the above.

But no, perhaps it’s actually Caitlyn…and your eye starts to anxiously twitch.

Then you feel a sense of calm and peace as you realise it’s ok to be Kris or Caitlyn. What do the younger girls know about life anyway?

You may not be in the gang of youth anymore, but you’ve got life experience and crow’s feet to show for it (even if Kris Jenner hasn’t), and you take a quick shot of f*ck it juice and google ‘how to get Carol Voderman’s look’ because if you’re going to embrace this middle aged thing, you may as well do it properly.

After all, under all that Clairol Root Touch Up, you’ve got more grey hairs than Philip Schofield, but who gives a flying….

You’re already stressing about how perfect you want your twinkly bush to look this year, and yet again you’re going to have to buy more fairy lights because the others are in that drawer.

You know that drawer – the one that’s rammed full of all the random items that you just don’t know what to do with.

Batteries (half of which are dead), rubber bands, takeaway menus, old keys (which open doors that don’t even exist) and tangled up fairy lights.

But the drawer is now jammed – probably by one of those damn batteries.

And you start to stress that everyone else in the world has an outside mains socket to power their twinkly lights at Christmas because the batteries (which you can’t even get to) always get wet, and then the lights don’t work after 2 hours…and why didn’t you think to buy a house with an outside main socket?

It’s all too much, how can other people be so organised?

It’s not going to be perfect, you want to cry and it’s only November.

But then you get a wave of f*ck it karma and you realise that nobody really gives 2 hoots about your twinkly bush. It’ll be down by 2nd January anyway.

It’s a whole load of stress for a few hours of pleasure. You’re just not going to do it this year. Your bush will remain barren. And quite frankly there’s nothing new there then, so who gives a flying….

You’re wandering round Top Shop with your teen and you’re sure it wasn’t that long ago you were solo shopping in this very same store every Saturday, and not feeling out of place.

As you fondly remember those carefree days, your body involuntarily starts to do that awkward dance-walk thing that only very uncool old people do in shops, jiggling your shoulders in time to the music. And you start trying to hum along to the dreadful ‘Top 40’ song.

You’d better ask your daughter in a really loud, embarrassing voice who sings it, so she can hear you across the rack of teeny tiny cropped T-shirts she’s eyeing up, which you don’t reckon would fit a Build-a-Bear.

You realise she’s horrified now, but you just can’t seem to give two sh*ts as you jiggle some more, then catch the eye of another embarrassing mum and you give each other that knowing look.

You’re officially in the uncool mums club and it feels kind of good, so who gives a flying….

You’re trying to help your 11 year old with his maths homework, but you just can’t seem to remember how to multiply fractions. Or divide them. Or in fact remember what a fraction is.

And then he moves on to shapes.

Your palms start to sweat as you can’t recall the name of a triangle with three equal sides. An equatorial? Your child sighs and tells you that that is a type of rainforest.

This is humiliating. So you test yourself on your times tables to see if anything has stuck, because you used to rip through those babies, right up to 12 times 12. But you get stuck on the 4’s.

Capital of Brazil? Nope. Last 5 prime ministers? Nope. What you had for breakfast? Erm…

Your mind has officially turned to mush. The abundance of information that was once stored in your brain (which would now seem to have shrunk to the size of a pea) has vanished.

You read something these days and have to go over it 127 times before any of the information will stick. Ask you about it 5 minutes later, and you haven’t got a clue. Nada. It’s gone.

But then you realise that your life these days will be no better or worse if you know what a rhombus is.

What you do know is how to be kind, how to love and how to look after the people in your life, so if you don’t know the square root of 169 anymore, quite frankly who gives a flying…