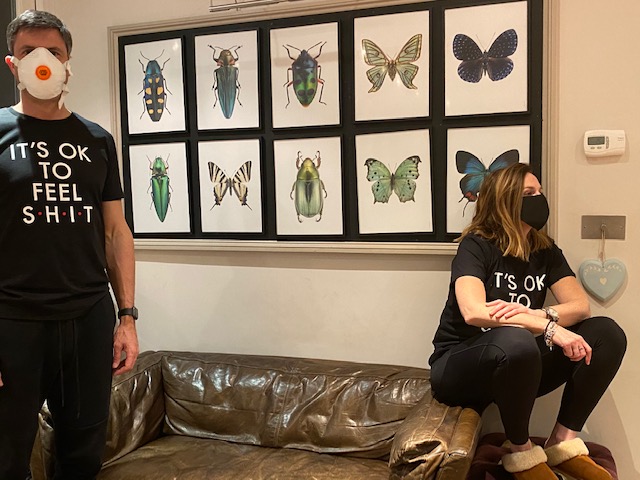 We have decided to bring you a regular update on cohabiting during isolation, as we’re presuming that most of you, like us, have never ever spent such an intense time together with no escape whatsoever.

It’s an experiment for many couples and families, that’s for sure. One which you may never ever wish to repeat, or perhaps you will happily lockdown out of choice after this is all over.

Whatever the case, it’s going to be rollercoaster and one which we’re all riding together.

As I work from home, I’m used to everyone clearing out of the house by 9am when I enjoy a blissful cup of coffee in peace before starting my working day.

But then when I turn round to get a spoon, he has somehow managed to quickly manoeuvre his large body in front of the cutlery drawer, then the mug cupboard, then the f*cking kettle, and so it goes on. He is EVERYWHERE.

And when he decides to eat (which seems to be an awful lot), it seems to involve a lot of loud, crinkling of packets. Crisps, biscuits, even eating an apple which has no packet whatsoever seems to involve an intensely annoying rustling noise.

I had never realised before this week that I’d rather hear my own cries of pain, than the noise of a packet being crinkled so loudly. In fact if this goes on, cries of pain will soon be heard, and they won’t be mine.

It’s so handy being able to ‘pop down’ from my new office and grab a snack.

I tend to like to just stand in front of the fridge and eat it so I can get back to my desk quickly.

I’m not sure it’s necessary for Mrs S.H.I.T to always want into the fridge just as I’m standing there trying to have some me time. She could probably just wait a few minutes, but instead I hear aggressive mutterings and the odd ‘idiot’,  ‘fridge’, and ‘move dickhead.’

Being the agreeable husband that I am, even though I am just minding my own business trying to enjoy a bite to eat, I move out of her way.

But next thing I know, she’s following me around, wanting into the cutlery drawer, the mug cupboard and then the kettle.

I think I’m going to have to tell her that this is precious time when I collect my thoughts before my first very important work call, and her coffee will have to wait.

We’ve taken to having a few family meetings to discuss what we’re all doing with our time, to make sure we’re all respecting each other’s space, keeping motivated etc. I think it’s a good idea so that we can make sure the kids are ok and keep them busy.

Mr S likes to use the time to tell us exactly what he’s doing to look after himself and how he’s making sure he’s ok. Then he seems to lose interest and starts giggling as he looks at silly corona memes on his phone.

I find the family meetings a good chance to let everyone know what my plans are for the next few days, how I’m keeping my fitness up etc.

Mrs S does seem to go on a bit about everyone helping out with chores and what we’re all doing to support each other.

As long as I get my runs in, keep on top of my work and see my mates on House Party, then that’s the main thing.

As a family, we’ve all discovered the app ‘House Party‘ – the kids keep up with their friends on it, and Mr S.H.I.T and I have been having a few parties ourselves with our respective friends.

Mr S is certainly embracing the House Party thing and enjoys a drink or ten with his mates nearly every night while they all shout over each other.

He seems to think that his friends can’t hear him so he shouts really, really loudly so that the rest of us in the actual house can’t hear ourselves think.

This can go on for hours as he and his many gangs of friends, seem to actually think they’re in the pub, even though it’s fairly obvious that they’re all in their bedrooms on their own, drinking lager and shouting loudly at a laptop screen.

All I can hear are the same boring, old stories that I’ve heard a million times over the years, when they’ve all behaved like total twats but clearly think they are legends.

Thank goodness for House Party. It really feels like you’re with your mates having a guess what..house party. Inspired.

It’s so good to see all the lads. We drink and talk and reminisce about the good old days. It’s important for us to regale old stories involving the hilarious antics we’ve got up to over the years, to keep our spirits up.

The one the other night was so brilliant, that Zammo (boys I went to school with, and yes he is the spitting image of the Grange Hill one, pre ‘Just Say No‘) stumbled into bed at 2am, and has no idea how he got ‘home.’

We are all incredibly lucky (touch wood) that we haven’t had any symptoms of coronavirus.

Mr S.H.I.T, however, has claimed to have had it several times already. In fact, he is the only man on the planet who has had CV19 six times, without any symptoms whatsoever, except exhaustion – probably due to all the nightly house parties he attends with his mates, drinking lager.

Whenever I suggest that he has had none of the symptoms (not even a cough), he harps on about this one day when he had a temperature of 38, which I quickly point out does not count seeing as the thermometer was resting on top of the radiator just before he used it.

I am convinced I have had coronavirus. I have been checking my temperature regularly and one day it was definitely up to 38.

I have had zero sympathy, however, from my cold hearted wife who claims I haven’t had any symptoms at all. I continue to tell her about that one day I had a temperature of 38 and didn’t even feel like watching the end of the Maradona documentary.

The boys on House party have been very kind and supportive though.

Homeschooling has been a nightmare so far.

I’ve been walking around in an anxiety-ridden daze after reading 10,000 daily messages from well-meaning Whatsapp groups, telling me of all the amazing things other people seem to be doing with their kids.

We haven’t even managed to keep up with Joe Wicks after my legs were so sore after day one, that I could hardly walk down the stairs.

School send through endless information on lesson plans while my son seems to have already forgotten how to write his own name.

Trying to keep on top of my own work while juggling three kids and their ‘learning,’ making endless food for them, emptying and refilling the dishwasher seven times a day and generally trying to keep their Nintendo Switch usage down while stopping them killing each other, is near impossible and driving me to the brink of a breakdown already.

Homeschooling has been going really well.

I’m very busy on calls all day so I admit I don’t get too involved, but I think the kids seem to just get on with it themselves and are learning almost as much as they would be at school.

Mrs S seems a bit frazzled by the end of each day, though I’m not sure why as everything seems to be very calm when I pop down to get myself a well deserved drink and some salty snacks. Perhaps we should make homeschooling a permanent thing.

However I’ve no idea why the aggressive mutterings start up whenever I start to open my bag of crisps. Last night she actually grabbed them off me and proceeded to pour them into a bowl. Very strange behaviour.