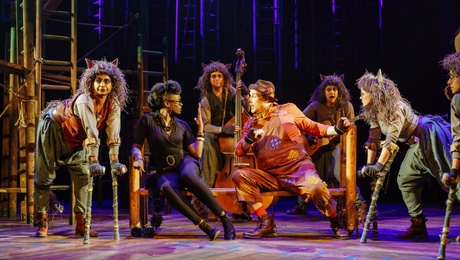 Who isn’t familiar with the good old ‘Bare Necessities’ and the jazz sounds of ‘I Wan’Na Be Like You’ from the Disney version of Rudyard Kipling’s The Jungle Book?

And more recently, of course, we were graced with the highly acclaimed 2016 film adaptation.

So how would the stage production fair in comparison?

I soon realised after the curtain went up at Richmond Theatre, that all comparisons go out the window as Jessica Swale, the Olivier Award winning playwright, has made sure this is very much a unique translation in its own right.

She went back to Kipling’s original book and found a treasure trove of characters, but decided to make the story more relevant to the modern world we live in, and refocused the tale to celebrate diversity. 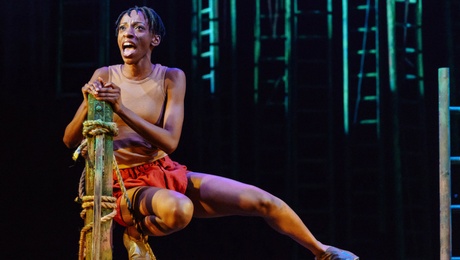 As we all know, a ‘man cub’, Mowgli, is found by a pack of wolves who want to raise him as their own in the jungle, after his father has been killed by the evil tiger, Shere Khan.

As the boy grows up he realises more and more how different he is to the wolf cubs – a difference he doesn’t want to accept. Like most children, he longs to fit in and be like the others, but the story carries a strong theme that everyone is unique and this makes us who we are.

Mowgli is played expertly by Keziah Joseph, so much so, that we forget she is, in fact a woman, and not a young boy. She nimbly darts around the stage, exploring the jungle with her animal friends – the jungle being depicted simply by ladders acting as trees. 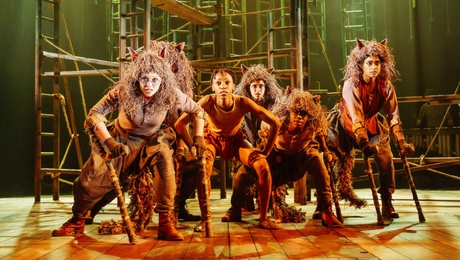 Simplicity is very effective throughout this production with the costumes being modern but basic.

The wolves are led by Akela (Tripti Tripuraneni) and portray four legged animals by the actors leaning on crutches creating their two front legs.

As we all know, Balloo and Bagheera step forward to take Mowgli under their guidance, and two more different characters there couldn’t be.

Balloo is a big hearted, fun loving, simple Welsh bear played delightfully by Dyfrig Morris. He talks to the audience at times which creates a fun, almost pantomime-like feel, which certainly engaged the children.

In contrast, Deborah Oyelade plays Bagheera with cool charisma, slinking around the stage with an air of sass and elegance. She is sensible and mature compared to Balloo’s childlike character.

The animals are all personified, but not overly so. The only one who might suffer from this personification a little is Shere Khan, played by Lloyd Gorman, who doesn’t seem as powerful and scary as perhaps he ought to. His stripey, sparkly jumpsuit and Elvis style wig made him look more of a superhero rather than the nasty villain, but my 11 year old daughter disagreed with me – perhaps he was aimed more at the youngsters in the audience.

There is a scene with a group of wannabe gangster monkeys who are desperate to capture Mowgli in an attempt to win over the ultimate gangster, Shere Khan. They are very contemporary in their gangster chat and the kids loved them. Lots of toilet humour and jokes about farting obviously appealed to all the under 12’s and no doubt some of the older members of the audience too.

Rachel Dawson is divine as Kaa the snake. She oozes deviousness and diva-esque behaviour and adds to the humour, of which there is much.

There is definitely a fun feel to this production throughout which is helped by the fantastic music, composed by Joe Stilgoe. The songs are catchy and engaging, so much so, that I didn’t give Bare Necessities a second thought. Who needs it in this strong production, which is unique in its own right?

Just as we are all unique in our own right which is the powerful message that this fun, engaging version of The Jungle Book carries the whole way through.

The Jungle Book is on at Richmond Theatre until 10 February 2018, and then on tour throughout the UK. For tickets and more information please go to ATG Tickets.