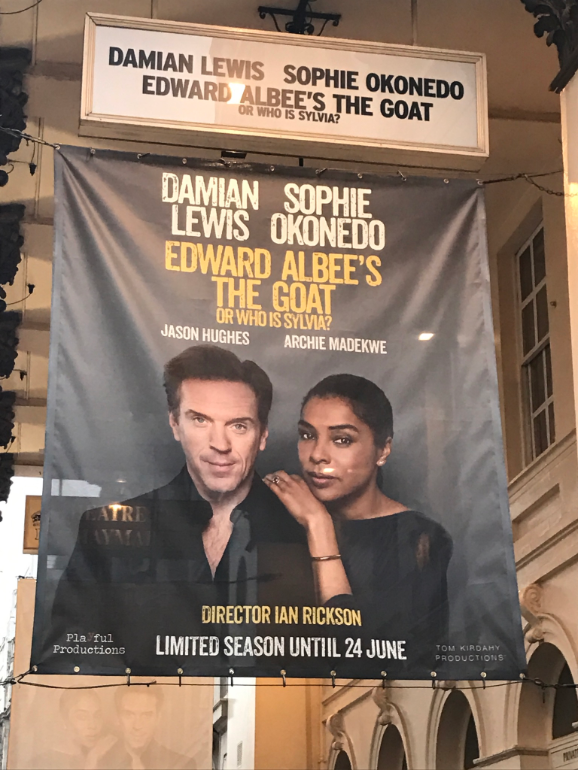 And his character is in love with a goat, of course

Damian Lewis as Major Dick Winters, the decisive leader in Band of Brothers.

And now Damian Lewis as Martin, the slightly geeky architect who is having an affair with a goat in The Goat, or Who Is Sylvia?

Such is Damian’s latest theatre role in the late Edward Albee’s Tony Award-winning play, directed by Ian Rickson, and now enjoying its 12 week run in the West End.

Martin, and Stevie – played by Sophie Okonedo – are a married couple living in New York with their gay teenage son, Billy.

All seems well when we first meet them. Martin is an incredibly successful architect who has won prestigious awards for his work, and it’s his 50th birthday.

There is a fun chemistry between the couple as Lewis’ character prepares for a TV interview in his apartment, the interviewer being his best friend, Ross (Jason Hughes).

Nothing amiss so far.

Ross arrives and soon realises that his friend is not quite himself. Well, to be fair, you wouldn’t really be, I’m guessing, if you’d been shagging a goat who you think you’re in love with? Fair play to Martin for feeling a little off colour.

But once he starts confiding in his best mate, we soon realise that Martin truly believes ‘Sylvia’ is the one. He is blinded by his love for his goaty girlfriend. I mean, this really is the real thing apparently, and not just plain old bestiality.

The awful and the shocking feature heavily in the work of Albee, and this is clearly no exception. It is a darkly comic play. One minute we are chortling at the absurdity, then horrified at the subject matter.

It is tough to handle, but equally transfixing.

And it’s not just a one-sided love apparently. Oh no, Sylvia (the goat) feels the same as Martin assures first Ross, then his tragic wife, who is confronted with her husband’s infidelity in a letter which Ross sends to her.

She is devastated, angry and repulsed and has a good old go at smashing up their New York apartment. You can’t really blame her though can you? It’s not everyday you find out your husband, who you thought you’d been happily married to for 22 years, has been getting it on with livestock.

The dialogue races throughout. Sophie Okonedo and Damian Lewis spark off each other with great intensity.

Their son, Billy, played by Archie Madekwe, walks in on the impassioned confrontation between his parents. You can feel how excruciating it is for him to find this out about his father. This thing that is so incomprehensible.

Both Okonedo and Madekwe portray such pain and confusion – it’s hard to watch this family unravel for such a horrific reason.

The acting is truly astounding. From all four of the cast. As they take their bows after a dramatic ending, they are both physically and emotionally spent. You can visibly see Damian Lewis trying to catch his breath.

Poor old Sylvia doesn’t really know what’s hit her, quite literally. An innocent goat caught up in a hideously messed up family situation.

The audience are exhausted, from just watching. And a little disturbed. But fascinated. It’s acting at its finest, in a very controversial play.

Edward Albee’s The Goat, or Who Is Sylvia? is on at the Theatre Royal Haymarket until 24 June 2017.