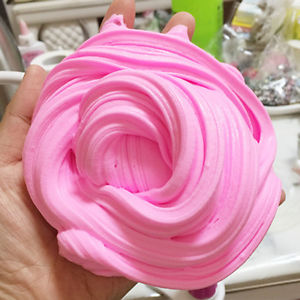 We’ve had Moshi Monsters, Fidget Spinners, Furbies and anything from Smiggle.

Most of these fads have an average lifespan of six months until something else comes along to knock them off the top spot.

But that was until the mother of all crazes came along.

Enter please, Your majesty, the fad of all fads…

And she ain’t going anywhere fast.

If you have a child (I’m guessing mainly girls, but please correct me if I’m wrong) between the ages of eight and twelve, then slime needs no introduction.

I’m sure, like me, you have evidence of it everywhere in your house. In the bedrooms, in the bathroom, in the living room – glitter, glue and your best tupperware full of the stuff scattered all over the place.

My girls started trying to make it last summer.

I naively thought ‘How lovely, they’re creating. This does not involve a screen. It’s just like that glorious summer of ‘84 when we used to try to make perfume by squishing some dandelions into a cup, and hoping it would smell like my mum’s Lily of the Valley.’

And so I wholeheartedly agreed to purchase the necessary ingredients, as bizarre as they were.

A bottle of Elmer’s glue, some food colouring and three boxes of Borax powder later (as well as my PayPal account being £30 lighter), and the girls set to work.

Days, weeks, months were spent trying to get the slime right. Sweat and tears were shed, both by them, and by me at the deteriorating state of my kitchen.

A wide range of YouTubers were called upon for help, and with that baking powder was added, bicarbonate of soda and shaving foam (for the fluffy variety, obviously).

By this point Mr S.H.I.T. had lost all patience and banned the evil gunk altogether. He couldn’t stand the sight of it. Finding some on his best golfing ‘slacks’ may have been the last straw.

But still they persevered sneakily, while he was at work, until finally Eureka! the secret ingredient was discovered – why, contact lens solution of course. Be gone with you Borax powder, all three boxes of you.

Finally I banned it from the kitchen, and so my utility room was transformed into an area reminiscent of Heisenberg’s meth lab in Breaking Bad.

A friend’s daughter has even created her own mobile slime-making kit. She can be seen on the bus, at the playpark or even happily walking to school making a quick batch.

She recently made it continuously on a two hour car journey, and only was her mobile slime kit shut down by her parents on the M25, when a can of shaving foam exploded all over the back seat, covering her, and her two siblings, in the finest Gillette Consumo.

But such is the extent of the fad.

We’ve had crunchy, foam, fluffy, glitter, and perfumed (that got terminated sharpish with the use of a few bad words – mine – when I realised my new Gucci perfume was liberally being used to make the slime smell sweet).

And those three boxes of Borax powder stare me out every time I open my cupboard. But you know, maybe they’ll come in handy one day to clean the floor.