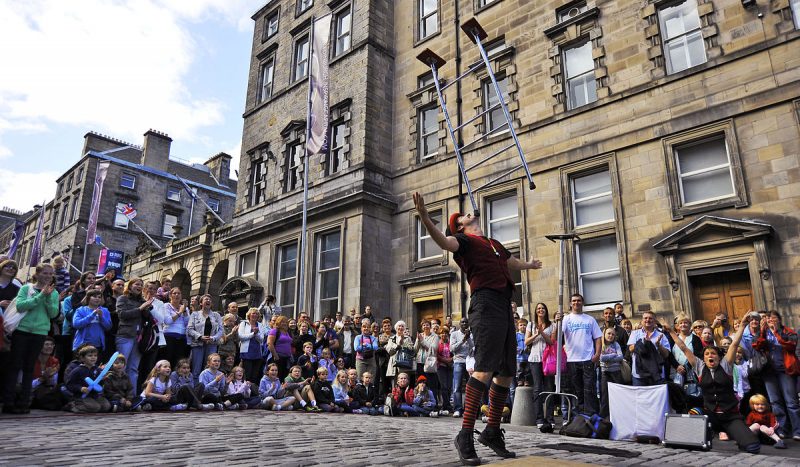 That’s right, we’ve escaped the Big Smoke and are now So Happy In Town Edinburgh – not only one of the best cities in the world (I may be biased seeing as it’s where I’m from) but also host to the largest arts festival In the world, the Edinburgh Festival Fringe.

For three weeks every August, Auld Reekie becomes a buzz of creative energy with over 3000 shows from all over the world coming to perform their hearts out, and thousands of global visitors descending upon the city.

This year is the Fringe’s 70th anniversary.

Back in 1947 eight theatre groups turned up uninvited to perform at the (then newly formed) Edinburgh International Festival – an initiative created to celebrate and enrich European cultural life in the wake of the Second World War.

Not being part of the official programme didn’t stop these eight acts, who went ahead and staged their shows on the fringe of the Festival anyway, and before anyone could say ‘Awa’ an bile yer heids’, The Fringe was born.

Since these spontaneous artistes said ‘Get Tae‘ to the establishment 70 years ago, thousands have followed in their footsteps and have come to the city to produce art of every genre.

The beauty of The Fringe is that there are no rules. Anybody and everybody is welcome. Student theatre groups rub shoulders with TV celebs and every venue imaginable in Edinburgh is taken over – churches, pubs, schools, university premises, alleyways, public parks, and more established theatres.

The comedy section is the largest, with many household names getting their big break here. Billy Connelly, Russell Brand and Steve Coogan are just a few of the famous names who first got noticed in the capital, as well as actors such as Emma Thompson and Alan Rickman. Many established stars have also been drawn to the event such as Richard Burton, Marlene Dietrich and Robin Williams, to name but a few.

My absolute favourite this year has been the Irish comedian, Jason Byrne, who’s performing every night at the Assembly Hall. I literally cried with laughter for the entire show – I’ve seen quite a few big name comedians but nobody as brilliantly funny as Mr Byrne. He’s taking his tour, The Man with Three Brains, all over the UK from October, so if you get the chance to see him live, don’t miss it.

Millions flock to enjoy the abundance of acts on offer. The energy on the streets of Edinburgh is buzzing and it’s extra special when you’re surrounded by the beautiful architecture of The Royal Mile, the Scott Monument, St Giles’ Cathedral, the Scottish National Gallery (the list is endless) and all to the backdrop of Edinburgh Castle. The views are pure braw.

You stumble across fantastic street performers at every corner. I found myself fascinated by a levitating Yoda. I still believe he was properly flying, but my pals just looked at me and told me to stop being an eejit.

There are lots of shows for the bairns to go and see too, as well as loads of entertainment for them in the streets alone. But as always, if taking the wains, go with realistic expectations of the world being about to end after three seconds of venturing out the front door due to a lack of snacks, drinks, too hot, too cold, are we nearly there yet and when are we going to see Mickey Mouse?

It’s a long day ahead when they realise they’re on the wrong holiday and Mickey is nowhere to be seen. Just lots of radges wearing See You Jimmy hats and Saltire catsuits.

Remember, of course, that us Sweaty Socks do indeed live on deep fried Mars Bars and pints of Tennents. But luckily for all you non Scots, there’s all kinds of well tidy scran on offer in our capital city, so you won’t starve.

Although you can get all types of cuisine, you must try some traditional Scottish dishes. Haggis may be offal in a sheep’s stomach but don’t be put off by that, it’s mighty tasty, I assure you.

Also, don’t be put off by the fact that many of our native culinary delights sound like something you might pick up in a Medieval brothel – cock-a-leekie soup, cullen skink, bridies, Partan Bree, Skirlie and Crappit Heid. Try to get over the names, and you’ll find most of them delicious.

And you cannot leave before visiting a Scottish chippie where your chips will be doused in salt n’ sauce and you can witness the world’s favourite food, pizza, be ruined. By deep frying it. Along with the Mars Bars. Nice.

Mustn’t forget our traditional orange fizzy juice, Irn Bru. It’ll put hairs on your chest and is an excellent hangover cure if you were reekin‘ the night before.

Everyone is friendly during festival time as the arts brings people from all over the world together. There’s a common feeling of excitement and joy.

And the people of Edinburgh welcome the world to their city.

In my eyes, nothing beats the people of Scotland for their humour, warmth, solidarity and love of everyone else’s crap impressions of Sean Connery.

We’re a nation so proud of our heritage and history, and there’s a lot to be proud of – The Big Yin, the Loch Ness Monster, Andy Murray, Braveheart (though the film’s entirely inaccurate, we still like it), the ability to drink most under the table, Sheena Easton, men wearing kilts with NO PANTS, we buy more Buckfast than anyone else, we invented golf, in fact we invented penicillin, road tarmac, the pedal bicycle, the telephone, PIN numbers, postcards, Encyclopaedia Brittanica, the television and the list goes on. You’re welcome.

And so, we are certainly pure dead S.H.I.T.E. this week and loving every minute. It’s totally barry. And the Edinburgh Festival Fringe is an experience not to be missed.

Haste ye back, as we say.

Get Tae – Get lost

Haste ye back – Come Back Soon

The Edinburgh Festival Fringe runs from 4th – 28th August 2017, and for 3 weeks every August. For more information click here.