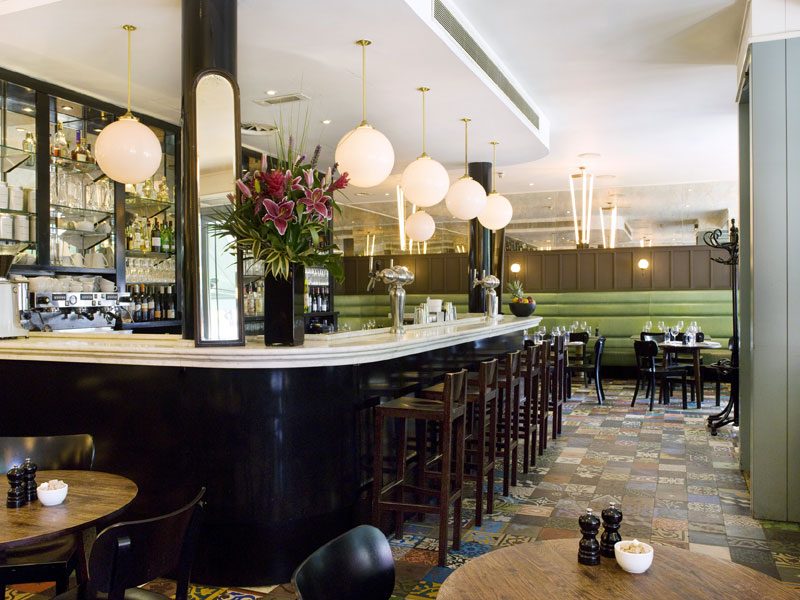 We decided to go off-piste recently by stepping away from the usual pizza establishments. I’d go as far as to say we went a little crazy by taking the S.H.I.T. weekend lunch outing to High Road House Chiswick.

The big question was, would this West London trendy members’ club and hotel (which we’re not members of sadly) cater well for a lunch of colouring, bickering and saying yuk when the food doesn’t look like pizza? And that’s just me and Mr S.H.I.T.

The Brasserie is open to Joe Public (the members’ club area is upstairs) and has a French-style terrace where the ‘young people’ sit outside under the canopies enjoying lunch time booze and fags. Don’t get me wrong, it’s not all cigarettes and alcohol – this is a very pleasant place to sit and watch the Chiswick world go by, especially in the warmer months.

The disgusted ‘pooooooo-eeey’ noises and exaggerated wafting of hands made by the little S.H.I.T.s when they pass anyone daring to partake in a puff of the old tobacco, can be fairly embarrassing. So, I promptly ushered them past the cool youngsters, into the main restaurant.

The décor features art deco elements and a vintage bar. It was bustling with people, mostly over the age of sixteen, but the atmosphere was noisy and relaxed so there was no added stress of our noise levels aggravating the young, brunching, hungover couples.

There is also a children’s menu, so little people are obviously welcome.

We were given a long wooden table right by the open kitchen, so we could observe the chefs in action, dealing with the stress of the Saturday brunch/lunch rush. That part was good, but the part where Boy Child decided to lie on the floor right where all the waiting staff have to put in the orders = not so good.

Obvs the kids were gutted that there were no pizzas or chicken nuggets on offer but we ordered a burger for the wee man and fish and chips for the girls.

High Road‘s kids’ menu is quite rightly doing the usual child-friendly repertoire, but with a healthier angle.

Mr S.H.I.T. and I have had some lovely grown-up date nights here but it’s not quite the same when you’ve got three hungry little people starting to wind each other up. I found myself wondering if anyone would notice if I squeezed on to the fun table in the corner, with all the beautiful smooth-faced young people, quaffing bloody marys, and deciding who they might snog later. I would only ever be snogging Mr S of course, but I could do the bloody marys and fun bit…

My reverie was broken when the food thankfully arrived.

Littlest S.H.I.T. wouldn’t touch his burger because it had a green thing in it (that’ll be lettuce then), and ‘what was that yukky yellow stuff?’ Oh, you mean that evil alien substance called melted cheese. Meanwhile the girls played around with their fish, as it was a bit too healthy and unbreadcrumbed for their liking.

The chips were inhaled though. Thank goodness for chips.

The gluten free options were not in abundance for me, but there was gf bread, so I had the avocado and crab on toast, while Mr S.H.I.T. had the roast chicken club sandwich.

They did take the coeliac issue very seriously and I actually had to sign a slip to say I agreed it was all gluten free – obviously seriously covering their ass for contamination, but I’m certainly not complaining about that.

The parental food was perfect for a Saturday lunch. And a welcome change from pizza chains to be honest.

We left without anyone hating us (except the waiter who had to continually step over the ‘I’m pretending to be a dead storm trooper’ child), and a large amount of debris under our seats – par for the course.

So, all in all, our venture with sproglets into the cool brasserie world of High Road House was a pleasant change for us, but not so good for the children due to the lack of pizza and beige food. But I’d say chicken nuggets and margheritas are exactly what High Road are trying to steer clear from, and good for them.

However, I might just hang out with a beautiful smooth-faced gang of pals next time – anyone know any who’d like to recruit a new middle aged mum friend?