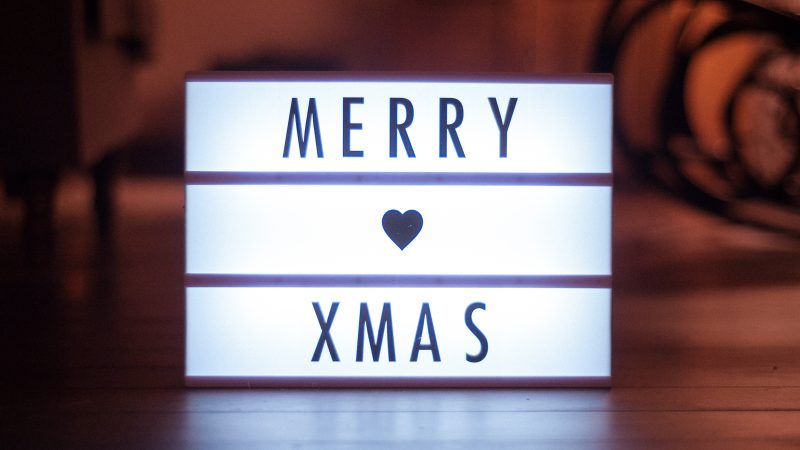 This starts off as a jolly family exercise with Mr Michael crooning in the background about his last Christmas. After 5 minutes however, the little S.H.I.Ts have lost interest and I’m left alone, cursing over the mass of tangled fairy lights.

I need my bush to be twinkly again this year. I do so love a twinkly bush and can’t have my next door neighbour having a more twinkly bush than me. I definitely requested last year that Mr S.H.I.T. put the lights away carefully to avoid this light-tangling catastrophe.

When I call through to him in the other room to gently suggest the lights could have been put away more methodically, he shouts from his horizontal position on the sofa that he likes my bush just as it is. I am wondering if, like the boys of Wham, this might be our last Christmas. Together.

I traipse off to get the tree as I do every year with the kids, and haul it into the house. This is no easy exercise and quite frankly, I am exhausted. As usual the tree is not quite right for Mrs S.H.I.T. Too big. Too small. This year apparently it is too pine-needly.

Anyway, some sofa time catching up on Arsenal on my phone is definitely well deserved after that effort.

Two seconds in and the lovely Mrs S is screeching something at me from the other room about tangled lights, twinkly bushes and last Christmases. I pop my headphones on and turn up Arsene Wenger. His dulcit tones are very soothing.

The list is as long as my arm and as always I wonder whether it might be better to send out an email to say I’ll give to charity instead. However, I battle on and buy for not only my family, but Mr S.H.I.T.’s entire family too.

He does not think, at any one point in the run-up to Christmas, to enquire about the present buying situation for his blood relatives. But at 9pm on Christmas Eve he wonders aloud what to do about a present for his parents. I look around for a sharp instrument.

One of the (many) wonderful things about being married is that I no longer have to give the awful process that is present buying a second thought. I just have to pretend I know what we gave everyone on the day. I think Mrs S.H.I.T. really enjoys doing it too, so it’s win win all round.

My workplace has a small Christmas ‘do’ where I usually down a couple of Bailey’s while listening to Jon in accounts witter on about Brexit.

Fortunately, I  have to race back for the fourteen year old babysitter who I’ve left in charge of the three most precious people in the world to me, even though he doesn’t look much older than my eleven year old. But beggars cannot be choosers at this time of year, and I have no choice as Mr S.H.I.T. appears to be taking full advantage of the silly season.

He apparently ‘needs’ to attend every single Christmas party going in December, with no apparent thought of when he should return home.

There are so many Christmas dos on, it’s a nightmare. I’ve not only got my five work ones, but I’ve got to try to catch up with the boys too. The uni boys, the school boys, the commute-to-work boys and the Fantasy League boys. I’m so tired. It’s alright for my lovely wife, she can make the excuse to get back for the babysitter. I have to stay till the end and show that I’m just as much fun as I was twenty years ago.

My email is bursting every day with new information about school Christmas fun which inevitably involves parental involvement. Teachers presents, nativity props, mini cheddars for class parties, and where on earth am I going to find a Christmas jumper at 6pm the day before Christmas Jumper Day. That email somehow slipped through the net and now I have a sobbing little S.H.I.T. on my hands.

Amazon Prime can’t even save me now.

One of the other little S’s helpfully suggests that I could just knit one – that night. I phone Mr S to see if he could source one on his way home but he can’t hear me over the loud, banging music. When I hear someone asking him if he’d like a tonic with all that gin, I find myself throwing my phone at the Christmas tree.

It’s amazing how little we have to do for the school. Obviously they don’t need much parent help.

Mrs S.H.I.T. did call me in a panic last night, shrieking about a Christmas jumper but I could only hear every third word. I was having to try to be fun at the new graduates’ Christmas do. I think it was really important that I was there, seeing as the rest of the management team felt it was unnecessary to attend. Quite the opposite I say, it’s important to show these youngsters that us old dogs still have it in us.

I’m not feeling like I’ve got it in me anymore however, and seem to have been moved permanently into the spare room.

I’m utterly exhausted by the time Christmas Day arrives. December has been nothing short of a marathon. I’ve bought all the food though, and set the alarm for 5.30am to get the turkey on.

But what’s this? Mr S.H.I.T. has beaten me to it. He’s up peeling spuds and parsnips. I’m told to go back to bed.

He proceeds to cook the entire Christmas dinner and only reverts to his favourite horizontal position in time to watch Gangsta Granny with the kids at 5pm.

I look over at him through a fuzzy glow of prosecco and Quality Streets, and realise he’s pretty wonderful, as long as he does the washing up, seeing as he’s managed to use every single cooking utensil and pan that we own.

I’m utterly exhausted by the time Christmas Day arrives. December has been nothing short of a marathon.  But I thought it would only be fair to let Mrs S.H.I.T. have a truly well deserved lie-in, so I get up early to put the turkey on. Thought I’d just crack on with the spuds and parsnips too.

As everyone opens their presents and I make the appropriate noises, I look over at my wonderful wife, and realise just how much she does for our family. If I tell her this, AND do the washing up, I wonder if I’ll be able to play golf tomorrow…

I just wanted to say a huge thank you to all of you who’ve taken the time to read my S.H.I.T. posts week in and week out this year.

I really appreciate your support.

Wishing you all a very Merry Christmas and a Happy New Year!