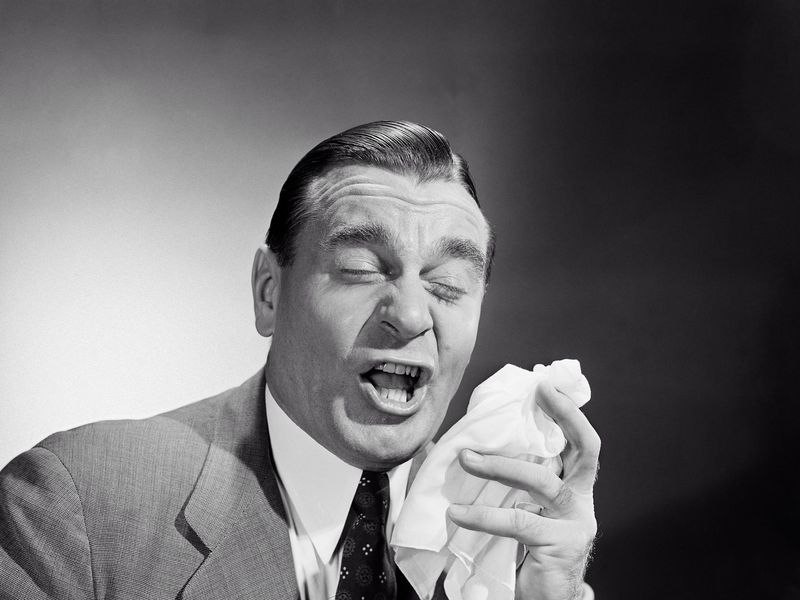 We’ve now done several weeks of cohabiting during isolation and this whole post is dedicated to noises.

Noises that once went unnoticed but now seem to irritate us so intensely they immediately transport our imaginations to the dark murky world of medieval torture….

Tea should be sipped. Quietly.

There is nowhere in the library of tea drinking etiquette where it says a cup of tea should be vacuumed up with the sound effects of a coffee percolator, like a snake sucking the last bit of blood out of a stone.

This outrageous noise violation can bring on dark thoughts of impalement.

Is Mr S.H.I.T the only person on this entire planet who deems it necessary to loudly chew on a banana? I mean properly chomp down on it with clashing of teeth.

Surely there’s a reason bananas are given to babies who can’t cope with proper solids, or old people who’ve taken out their dentures? They have no teeth.

I am no longer buying bananas.

I’ve never been a fan of the crinkling packet sound.

I can’t explain it, but it just drives me bananas (the very same ones that should be eaten in silence).

Mr S, I have realised during isolation, loves a good old crinkle.

Every time he pokes his nose into the food cupboard (which seems to be every two minutes) he starts rummaging around.

Until he finally finds his snack of choice. And then it begins.

Even after he’s finished his snack and you’d think that any more packet crinkling would be entirely futile, he carries on.

Folding a crisp packet up into some kind of tiny origami creation, for example, seems to be a favourite pastime.

This conjures up an image of thumb screws which could nicely put an end to it all.

Now this is not a new thing. Mr S.H.I.T has always been a sigher.

But the volume of sighs has definitely increased during lockdown, both in noise level and number.

It would seem that sighs must be released loudly and with much drama. And at any given time during any given activity.

Getting up in the morning = several heavy dramatic sighs.

Pouring out muesli while scattering half of it all over the floor with gay abandon  = even more heavy dramatic sighs.

Would he continue sighing if I just grabbed a load of that (noisy) muesli and rammed it up his nose, I wonder?

When Mr S.H.I.T decides to bring his laptop down to the communal kitchen table, you’d not be wrong for thinking this is an innocent action which should cause no harm.

It does indeed cause a great deal of harm, however, when off he merrily goes with his tap, tap, tappity, tap.

Followed by a pause (to lull me into a false sense of security that I might be able to get some peace to gather my own thoughts), while he takes a minute to suck up his tea Alberto Frog-on-speed style.

But soon the frantic tapping starts up again. Getting louder and louder with those big, fat, angry man fingers.

It seems he may, in fact, be trying to ferociously tap his way through the keyboard, down into the earth below to find oil.

Perhaps he could just do that and stay there for the rest of lockdown, taking his slurpy cup of tea and crinkly crisp packets with him?

“Some people can control their sneeze volume, or dial back on the vocalisations” says a sneeze expert.

Clearly Mr S is not one of these people.

The whole house judders when one of those tsunamis flies out of his nose.

It’s half roar, half scream.

To say he frightens the living daylights out of us all would be an understatement.

I have suggested he try to ‘dial back on the vocalisations’ and sneeze like a normal human being, or better still, not sneeze at all if he’d like to continue to cohabit post isolation.

These can be any kind of calls.

Work conference calls, calls to his parents, House Party calls, Zoom calls or verbal calls to us from his ‘office’ when we’re all making too much noise living (because he’s making one of his very important calls).

But they all have one thing in common – Mr S.H.I.T’s over zealous, shouty voice – just in case the person on the other end may not hear him because lockdown has clearly made us all hard of hearing.

Think an impassioned Arthur Scargill at the 1984 miners rally, aggressively trying to get his point across to thousands of miners.

Minus the combover, although it might not be long until he’s got one of those too.

But it’s not Arthur amid thousands of aggravated miners. Just one man in a room on his own, talking extremely loudly to a screen.

When it comes to noises, there’s no specific ones that Mrs S.H.I.T makes that I can think of, just the permanent background noise of her incessant talking.

I have no idea how one person can witter away for the entire day without so much as coming up for air.

I now pretend I can’t hear her.

I have actually managed to fade her out completely. Her lips still move but there’s nothing coming out.

And then I am at peace to have a nice cup of tea, followed by a yummy banana and maybe some nice crinkly crisps, while I make an important call, before I quickly bash out some e-mails at the kitchen table and more often than not sneeze consecutively for 3 minutes.

So as you can see, I really don’t make much noise at all.