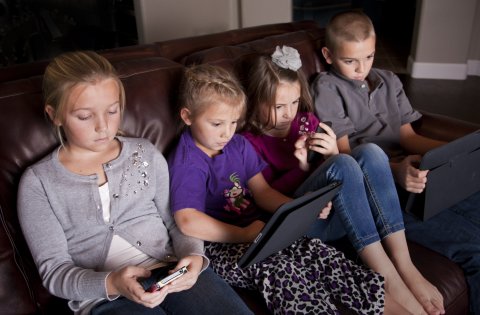 ‘It is impossible to recommend appropriate screen time for children as there isn’t enough evidence to confirm that it is actually harmful’ says a new report carried out by The Royal College of Paediatrics and Child Health.

I went out into the streets of the capital to ask a number of parents how they feel about the latest studies, and if the amount of time their kids spend on screens is affecting their family life.

Jerry Attrick from Battersea described how he feels about limiting screen time ‘It terrifies me. Sometimes I wake up in the middle of the night pouring with sweat, thinking that I’ve forgotten to charge the iPads up. I mean, what would we do? Would we actually have to talk to the kids? It doesn’t bear thinking about.’

Olda Macdonald and her husband, Ronald, from East Sheen took matters into their own hands to avoid such a situation. ‘We got back up devices’ Mrs Macdonald told me. ‘I admit it was costly and we had to live on Frazzles for a few months, but it was worth it just to know that when we hear that strangled cat noise coming from one of the kids it can only mean one thing. We sprint to get the emergency screens which are set up and ready to go 24/7. They pipe down as soon as they’re plugged in again. Worth every penny if you ask me.’

When I asked Shoreditch based IT consultant, Millie van Illy, if she felt her children did less exercise as a result of screen time, she admitted it is a problem. ‘We do occasionally feel guilty. But we just lob the iPads down to the end of the garden every so often and you’ve never seen them run so fast to fetch them. And that’s their exercise for the day.’

I asked top management consultant from Notting Hill, Stanley Nife, if he felt that this generation of kids will lack career goals as the world of social media is all they care about. ‘Not at all’ he replied. ‘I couldn’t be prouder of my boy wanting to be a YouTuber when he grows up. He could have a really important sounding name like Thinknoodles or Pewdie Pie.’

When I suggested to stay at home mum, Cat Alogg, from Balham if she felt she would like more toys for her three young kids to play with instead of giving them screens, she said ‘NO WAY. We’ve finally got rid of all that hideous plastic tat in our house. There isn’t a toy in sight. Minimalist living all the way thanks to Steve Jobs. God bless the iPad.’

Jim Hall and his wife Church, from Ealing, even argued that that they’re actually saving the planet by no longer buying plastic toys. ‘We’re doing the world a favour. Plastic tat is wasteful. It’ll just end up at the bottom of the ocean. We all need to do our bit and my advice to any new parent is to get your kid rigged up to a screen as soon as they can hold their little head up. In fact, in those first few weeks after they’ve been born you can just lay them down on a pillow with the iPad propped up next to them.’

When I informed Isleworth newsagent owners, Terry & June Sullivan, that the report had said there was no evidence to say screen time was harmful, Mr Sullivan seemed outraged that there could have been any findings to suggest otherwise. ‘Harmful! I’ll tell you what would be harmful – if they didn’t have it. Imagine having to actually play with them?’ Mrs Sullivan chipped in that if she’d had to sit on the carpet and play another minute of boring mindless dolly games with her two daughters ‘I might have caused some harm, let me tell you.’

I asked them how they feel about the fear that screens are causing kids to lack emotional awareness and that the family bond is breaking. ‘That’s a load of nonsense’ replied Mrs Sullivan. ‘It’s amazing how nice my kids are to me if I threaten to take the iPad away unless they show me some love. They give me hugs and everything.’ When I suggested that this could be seen as bribed love, she argued that this wasn’t the case as ‘they also tell me they love me when they want me to buy them more Roblox, so it’s definitely real.’

Card games and I Spy seem to be a thing of the past when it comes to travel. Mike Flight, the MD of top travel agent, “Hollibobs”, told me that an increasing number of parents will only fly on airlines that provide WiFi in the sky. It’s also viewed a necessity that hotels have good WiFi so that their kids can sit in the hotel room all day on their screens. This allows the parents to pretend they are on a child-free holiday.

I stopped by a Richmond toddler group ‘Toddler Terrorists’ to ask the mothers what they felt by the latest amibiguous findings. Group leader, Jane Mangel, said ‘We had a little party to celebrate. We rely heavily on screen time because Toddler Terrorists is our time to drink coffee and slag off our husbands.’ Sure enough the few toys that were out were hardly touched during my visit and the kids barely made a sound as they all appeared to be on their mums’ phones.

‘It gives us a chance for some peace. I mean let’s face it, who wants to be disturbed by annoying kid voices’ Mrs Mangel told me. Sure enough when one little girl attempted to push a baby buggy towards her mother and clearly wanted to interact, the group went into panic and she was immediately wrestled back into her own buggy, handed the phone and told that she had to play Plants versus Zombies otherwise she’d get a time out.

It would appear that parents are generally relieved by the latest findings and if anything, would like screen time to be added to the list of what we are told we should be giving our children: breast milk, organic vegetables and as much screen time as possible. Let’s see what the future holds.

Disclaimer: Please note that this article is entirely tongue and cheek and just like all parents in this technology crazy society, Mr & Mrs S.H.I.T. are stumbling around, trying to navigate their way through the world of Roblox and Minecraft and how much of it to allow, with no clue what they are doing.