The little S.H.I.T.s and I went to see Moana at the weekend – one of the many great kids’ movies that have been released in the last year – a film about an adventurous young girl who sets out on a daring mission to save her people.

As is customary these days, the animation is incredible, the script is sharp and funny and there are strong moral messages.

But the main thing I came away with is that girl power is alive and well.

The heroine is, indeed, Moana herself. The daughter of the chief of a Polynesian tribe, she is strong-willed and adventurous, and frustrated by her father’s strict rules that sailing beyond the reef is forbidden.

But when fish become scarce, Moana defies her father and sets sail on a treacherous journey with the demi-god Maui who she meets on the way – you know, as you do.

They encounter enormous monsters and impossible odds but nothing stops this girl. She is not afraid of anything and will stop at nothing to do the right thing for her people.

Moana seriously kicks some ass along the way. And she is not alone in spreading girl power.

Another recent big hit was the movie, Trolls.

Princess Poppy is our heroine in this moralistic tale of good winning evil. Yes, pink Poppy is all glitter and hugs, but her fearlessness kicks in when she realises she must save her fellow Trolls.

Just like Moana, her strength and optimism prevail throughout the darkest of situations.

And the list goes on: Anna and Elsa in Frozen – both strong, inspiring women in their different ways.

Mulan, the heroine and Chinese warrior who helped her people back in 1998 – a badass with weapons.

These leading ladies are tough cookies. Nothing will stop them from achieving their goals, whether that be saving their people from alien abduction, or putting yourself in isolation to protect everyone else from being frozen.

Anything is possible. Their optimism never dies and they never give up, whatever the odds are that are stacked against them, and believe you me, these are serious odds at times. I’m not sure many people in their right mind would take on the Lava Demon (think I’d just go for the easy option and head home for a cuppa in front of Made in Chelsea) but not Moana. She faces this huge hideous Lava beast-of-a-thing head on.

Gone are the days of Cinderella and her princess pals, waiting for their Prince Charming to swoop in and make everything better.

These are precious fairy tales, of course, but the new girl gang are fiercely independent. They aren’t waiting for anything else to save them. These sisters are doing it for themselves, thank you very much.

Don’t get me wrong, today’s animated ladies aren’t taking over from their male counterparts, but they are just as brave, fierce and downright dazzling, in their own right.

And that’s what it’s all about. Equality. 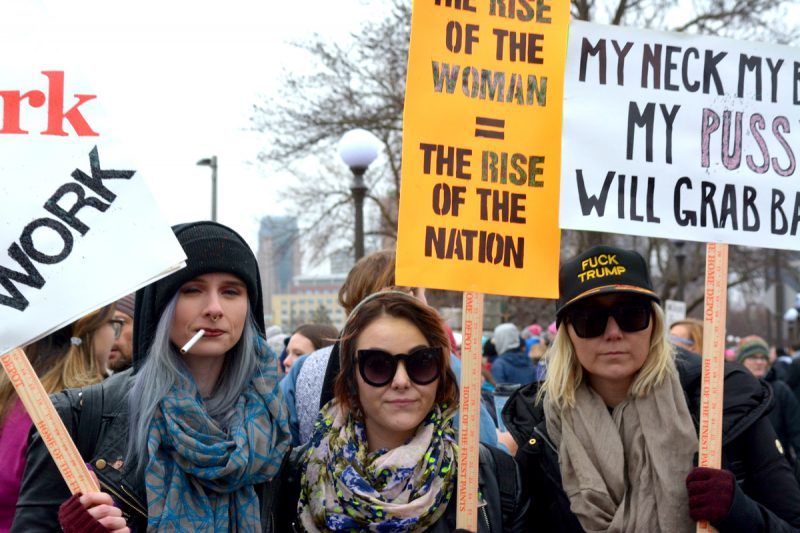 The Women’s Marches that took place across the world on the first full day of Trump’s presidency were awe-inspiring. Over 100,000 protesters, men and women, marched in London alone, sending a bold message to the world that women’s rights are human rights.

When President Donald Trump was voted in by the American people in November, it was a move that rocked the world, people were frightened. Frightened for their children and the future of the world. Frightened that all the work that has been done to make girls and women realise their value, will be undone.

But if these kids’ movies are anything to go by, our young girls know they can be Annas, Elsas, Tips and Moanas. I might suggest my girls stay away from any Lava Demons for the time being, but apart from that, they can be and do whatever they put their minds to.

But it’s our responsibility to keep reminding them.

And like all these optimistic leading ladies, we must look forward. We must live in hope that President Trump turns out to be a Wreck-It Ralph – an arcade game villain used to destroying buildings thanks to his huge fists and steaming hot temper. But after thirty years of chaos, Ralph learns that there’s a way to be good, a way to help the people.

We must live in hope that the world unites in their respect for girls and women being strong and independent, just like boys. There are no differences. We are all equal.