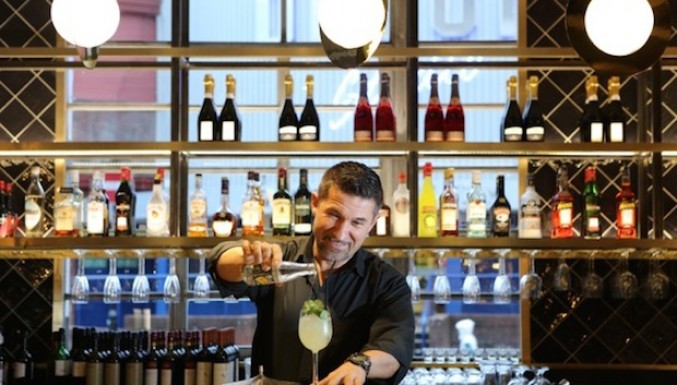 As you walk into Pizza Express in Richmond, the reception area is now like a cool, minimalist American hotel. Further back a number of tables with dark, green velvet chairs are set in front of the big, vivid cocktail bar lit by funky, low hanging lights. A great spot for drinks, never mind the food.

Olive green leather booths and dark oak tables have replaced the bright red and white plastic décor of the previous American diner style; a much more sophisticated look which seems a world away from the hustle and bustle of family mealtimes that has become synonymous with the chain. They cater for families so well, but tonight’s clientele are here for a relaxing evening of music and dining.

As of 14th January, the Live Playlist has been held every other Thursday evening. This is not an open mic kind of affair with singing hopefuls taking to the stage. The standard will see music lovers attracted by the talent, with the pizza coming second. It was fortunate that we were distracted by the music as we did sit for half an hour before our first drink arrived though to be fair, the service did improve after that.

Him and Her consist of local duo Tom Speights and Eliza Shaddad. Although both are established solo singer/songwriters in their own right, their individual musical talents gel together so smoothly, into one beautiful honeypot.

Their opener was David Gray’s Babylon with Eliza’s husky, mellow vocals making it her own and Tom supporting on guitar. They did a number of other covers including a gorgeous version of Tracey Chapman’s Fast Car, Oasis’Wonderwall, even converting me to Britney Spears with Tom’s soothing rendition of Baby One More Time. They owned each song and caressed it with their folk inspired style. The varied playlist included a sprinkling of their own material such as Tom’s gorgeous Willow Tree, a song that I instantly downloaded when I got home, along with Little Love and Eliza’s debut EP Waters.

Talking to them both after their set, I learnt that Tom has toured with Keane and Travis and is about to play some dates with Turin Brakes, whilst Eliza has an impressive catalogue of her own, having written songs with the likes of Clean Bandit.

With such talent on show, I was not surprised to learn that the team who book the artists are also responsible for Pizza Express’ world famous Jazz Club Soho whose past acts include Van Morrison, Tony Bennett and Amy Winehouse. Whether that means future big names in Richmond or not, the Live Playlist is still the perfect opportunity to appreciate great musical talent in a newly grown up venue right on our doorstep. Something definitely not to be missed.