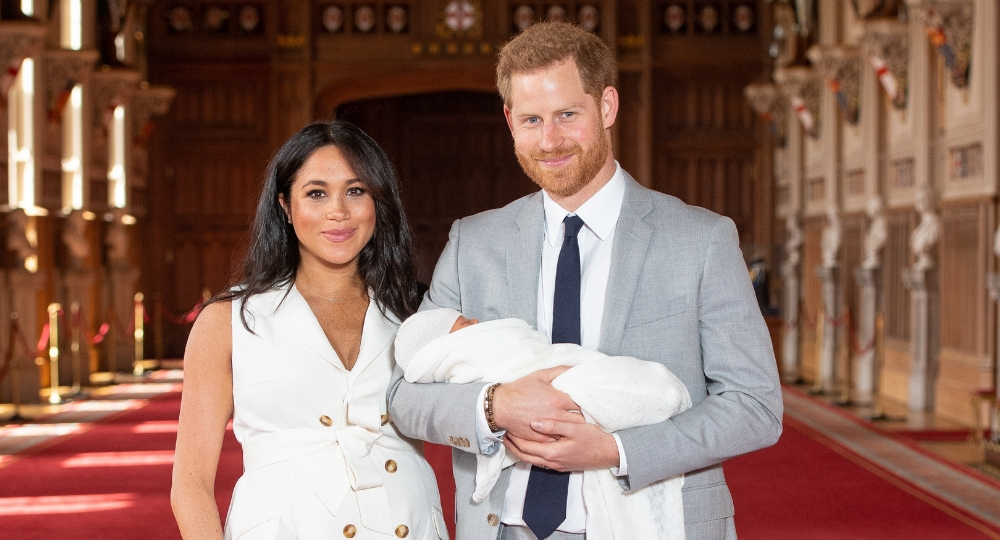 Huge congratulations to Meghan and Harry on the birth of their first baby, Archie.

And wasn’t it lovely to see them both glow and giggle at the pure loveliness of it all?

I’m sure many of you, like me, watched the new parents – clearly still so in love with each other and this little miracle they’ve created – with slight envy as you looked back at those first few heady days all those years ago, with your newborn baby, when it all just seemed too wonderful to be true.

I’d love to tell them that the first few days/weeks aren’t a smokescreen for the real avalanche of life-changing shit that will be thrown their way, but then I wouldn’t be being altogether truthful.

So here’s Mr & Mrs S.H.I.T.’s insight into life with a new baby, way back when we did it for the first time 13 years ago.

This isn’t too hard, I smugly thought to myself during the first two weeks of having my newborn.

My bundle of joy just sleeps all the time so I’m not really sure what all the fuss is about? And I’m even more in love with Mr S.H.I.T. than ever having created this teeny, tiny human being together. Let’s face it, nothing much in our lives is going to change.

Fast forward three months, and the shit hit the fan (quite literally), I was surviving on twelve and a half minutes sleep a night, and my husband was a giant tit who skipped off to work each day.

Those first couple of weeks were lovely – deliriously happy wife, sleeping baby and I even squeezed in a few holes of golf. We’d show all those doom and gloom friends who’d done it before that it really didn’t have to be such hard work.

And I was right. As far as I was concerned the baby seemed to be sleeping through the night from day one. I never heard a peep anyway.

The deliriously happy wife bit seemed to rapidly vanish however, especially when I’d wake up after a sound eight hours sleep and say ‘that was a good night wasn’t it?’ I soon stopped saying it when she told me if I said it one more time she’d suck my eyeballs out with her breast pump.

Her previously youthful, glowing complexion did seem to take on a bit of a weary, ashen look, but I didn’t really have time to worry about that because I had to take a really nice long shower all by myself each morning, before heading off to the real world to talk to fellow adults about important things.

In the early days, post giving birth, I embraced my baby bod. I still loved my swollen belly and fat ankles because that bod had produced such a miracle. And the extra pounds would be sure to drop off once I’d been breast feeding for a few weeks. That’s what all the books assured me anyway, so yes please to more cake.

But when I was still wearing my maternity clothes a year on, I now had what I believe to be known as  ‘cankles,’ and people kept asking me when the next baby was due, I reached for the Hobnobs. And the cream cakes. And the vodka. Screw the breastfeeding. I was forever destined to resemble a very, very tired Jabba the Hutt.

Luckily my baby bod only gained a few extra pounds during the pregnancy as I had to indulge in some extra calories to keep my beautiful pregnant wife company. My back did hurt a little from carrying the extra weight around but it was all so worth it when our little one appeared in the world.

I was soon back into my 32″ jeans though and everyone kept telling me how well rested I looked.

As for breastfeeding, I had pictured sleepy, dreamy bonding times at 3am with just me in my White Company cotton night dress, and my newborn happily suckling away at my full milk laden breasts. Nothing feels better – for you or ‘baby’ – so Linda, our NCT coach had promised. ‘You’ll be a natural’ she’d said.

But it felt about as natural as voluntarily snapping on large, jagged, rusty nipple clamps every time my seemingly ravenous little bundle decided to have a snack.

At 3am when I would hear the parrot squawk crescendo, I’d stumble to the cot with heaving boobs leaking all over the carpet, then as ‘baby’ latched on, I’d wince with extreme pain and imagine stuffing hundreds of soggy breast pads into Linda’s deceitful mouth until she could no longer breathe.

As for breastfeeding, breast really is best, as our wonderful NCT coach, Linda told us.

It was a real shame I couldn’t help out with the feeds, especially the nighttime ones, but I know what a wonderful bonding experience it is for a mother and her child and I wouldn’t want to get in the way of that. I might even go as far as saying I was jealous of that little person getting all that time with Mummy and her boobs.

So, I just had to let them get on with it and sleep. All night.

Once I had my baby, I decided I didn’t need anyone else in my life (well, apart from Mr S and even that was debatable at times). And after all, I had all my new NCT chums to meet up with every week who I could talk to for hours about nothing but baby stuff – which nappies were the best, how many muslin cloths you should have and how amazingly wonderful it was when ‘baby’ smiled as she squeezed one out.

But after a few months on maternity leave, all I wanted to do was meet up with my old mates, get rat arsed and talk about anything but babies.

I was lonely, I was bored and as much as I adored the bones off my little treasure, I just desperately wanted another adult to value my opinion again.

I craved the moment when Mr S.H.I.T. would walk back through the door each day after work, and then would find myself being utterly vile to him because clearly everything was his fault seeing as nothing had changed in his life at all.

The best thing was I had a new group of drinking buddies –  ‘The NCT boys.’

We found it very helpful to meet up regularly in the pub to offer each other support over how hard it was carrying a 12 pound baby in the Baby Bjorn every weekend, while simultaneously batting off attention from young ladies who wanted to coo over the little one.

I was obviously very keen to come straight home after work as soon as I could to see Mrs S.H.I.T. and the baby, but as time went on, it would appear that Mrs S found my presence extremely irritating and so I decided it would be best if I did more socialising after work, to keep out of her hair.

For some reason this seemed to infuriate her even more, but I was working very hard all day sitting at my desk while she was resting with the baby, watching Neighbours and Home & Away, and eating cake with her new NCT friends. I felt it was my time to unwind.

I once suggested how lucky she was to have all this time at home, and she threw a densely packed nappy at my head. I still don’t know why.

There we have it, a little insight into the S.H.I.T. life with a new baby. We’d like to wish Harry and Meghan and all proud new parents out there all the best, and to tell them to enjoy every minute of this special time.

It might feel like a crazy time of sleep deprivation and not knowing your ars from your elbow because, let’s face it, none of us have a scooby what we’re doing after bringing a little human being into the world, but it truly is wonderful and extremely precious.

And before you know it, you’ve got angry, screen-addicted teenagers who grunt at you and lock themselves in their rooms only coming out for food and the occasional rant at how rubbish and unfair their life is. And generally how rubbish and unfair you are too. Then you look back at those early years with very fond memories and realise it wasn’t really that hard at all. x