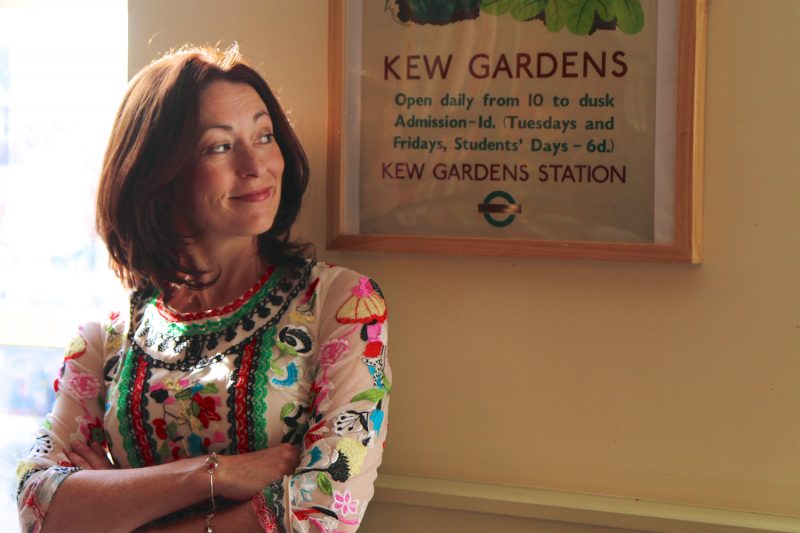 I am thrilled that next up in my series of inspirational S.H.I.T. people is none other than author, Tor Udall, whose debut novel, A Thousand Paper Birds, is taking the literary world by storm.

It is an intimate portrait of five inextricably linked lives, spanning one calendar year in Kew Gardens. A truly stunning story of love, loss and grief, played out to the backdrop of Kew’s beautiful botanical gardens.

Tor studied theatre and film at Bristol University before co-founding a dance-theatre company.

She spent most of her twenties directing, writing and performing. She also taught drama for several years at a sixth form college and choreographed an opera for the Royal College of Music.

She lives in London with her husband and two young children.

Describe a typical day in the life of Tor Udall.

After getting the kids to school/nursery, there is the much-protected, sacred, quiet coffee. If it’s a writing day I’ll then spend seven hours at the laptop, stopping every now and then for more caffeine.

Since the novel has been launched, there hasn’t been a typical day. I may be visiting a bookshop to sign stock, travelling to a venue for a reading, going to an interview, doing the final edits to the book trailer, or putting secret paper birds all over Kew Gardens…the list goes on.

From 5pm my focus returns to the children and there’s the hectic few hours between school pick up and bedtime. My husband and I try to get some ‘us’ time at dinner. As parents of two young children we don’t get out as much as we’d like. I really miss just popping out to a restaurant or the movies. Evenings can include TV or reading, or if I’m up against a deadline, more writing. I often write until three in the morning. I like the quiet of night. No distractions.

Everything! I love the beginning of an idea. I’ll gather research and literally cover my room in post-its and images as I develop the characters and map out the story. I love the writing itself when a sentence suddenly surprises you. I love the strange coincidences that often occur during the creative process. For instance, I’ll be writing a pivotal scene about a character finding a stranded gardener’s boot then walk down the high street and stumble upon a single gardener’s boot left on the pavement. I mean, what is that? Those moments are magical – as if the universe and I are dancing.

With publication I have also discovered the joy of having readers. To hear that my writing has touched another person…well, there’s nothing quite like it. I can create something from words and paper, but it is the reader who breathes life into it.

How did the story of A Thousand Paper Birds come to you?

I was living in a small flat on Kew Road with very few windows so I would often write in the Gardens. A particular bench became my makeshift office. Although I was working on a different novel, I couldn’t help but be moved by my surroundings. I was particularly struck by the abundance of nature in juxtaposition with the commemorative benches. All those people ‘who had once loved these gardens’ made me even more aware of how fleeting life is. How precious.

At the same time, I was researching origami and stumbled upon an interview with an old origami master. He said he had spent his entire existence trying to express, with paper, the joy of life, or the last thought before a man dies. One thing the book tries to do is stretch that final moment. If I could press pause between my penultimate heartbeat and my last, what would my thoughts be? How does anyone say goodbye? The book has a lot of gratitude. It’s really a love letter to life.

Simultaneously, post kept arriving for a ‘Harry Barclay’ but no one of that name lived in my building. Occasionally I would carelessly jot down, ‘Who is Harry Barclay?’ until my notebook was littered with that question. It evolved into being the central mystery of the story…

During the development process, the issue of creativity became a strong theme: a woman trying to create a child, a man trying to compose music. Their struggle contrasts with the inherent creativity of nature in the Gardens. So I had to look at how to weave these different ideas, motifs and themes together. It was a slow process – I let it simmer for a few years before I began the actual writing.

Kew is really the major character in the book. I’m interested in how a place impacts people, how it can shift our mood. I love the sense of atmosphere in Kew – it’s so rich in history. For centuries, people have come for inspiration, solace, beauty. It’s a place that reminds you to breathe a little deeper – to take the time to notice what’s going on around you – and inside you too.

It’s a great place for people watching, and I tried to capture what I witnessed: fleeting encounters, the gaze between two people, cherished moments between a mother and child.

I spent a lot of time writing on a particular bench by the lake – which later became Audrey’s bench – a character in the book. On wet days, I would write in the Palm House, perched on the heating pipes in the mezzanine. A great place to warm your bottom!

As a writer it certainly helped that the areas in the garden are so varied. The glasshouses feel like a different world to the Redwood Grove. So each character has a particular location that resonates. I had a lot of opportunity to play with how the seasons affect the garden and the people within it.

I was also interested in the notion of a garden being transformative. I guess from an early age, many of us read Frances Hodgson Burnett’s The Secret Garden and learnt the power of nature. If you enter a garden, and let it enter you, you leave changed.

What’s the best piece of advice you could give someone wanting to write a book?

Don’t talk about it. Just write. Read your work out loud to listen to the rhythm. Read LOTS. Write because you’re fascinated by the question or the challenge. Write because you love the act of writing. Don’t write because you want to ‘be a writer’. It’s the journey you need to love – not the destination.

How did you go about getting A Thousand Paper Birds published?

The first step is to get an agent. I attended the Festival of Writing in York which is a wonderful place to meet agents and get feedback. I attended the Festival in 2013 and a week later eight agents wanted to represent A Thousand Paper Birds. I did another couple of drafts with my agent before we submitted to publishers. The foreign deals came in first – then Bloomsbury put in an offer.

How do you manage to juggle your work around your children?

With difficulty and a lot of childcare. I started writing A Thousand Paper Birds when my daughter was four months old. It took five years (and four drafts) to get it to a place where it felt ready to submit to agents. Once I had signed with the agency, I discovered I was pregnant with my second child. The next couple of years were stressful. It was a high-risk pregnancy but I continued to write (even when I had gone into labour – what was I thinking?!).

Then there was the year of trying to write while one foot was rocking the bouncing chair, or while I was breastfeeding. It was hardcore. Let’s just say sleep and personal hygiene became last on the list.

On a desert island, what are the 3 items you couldn’t do without?

A notebook & pen, an iPod, my family (might have cheated a bit there). 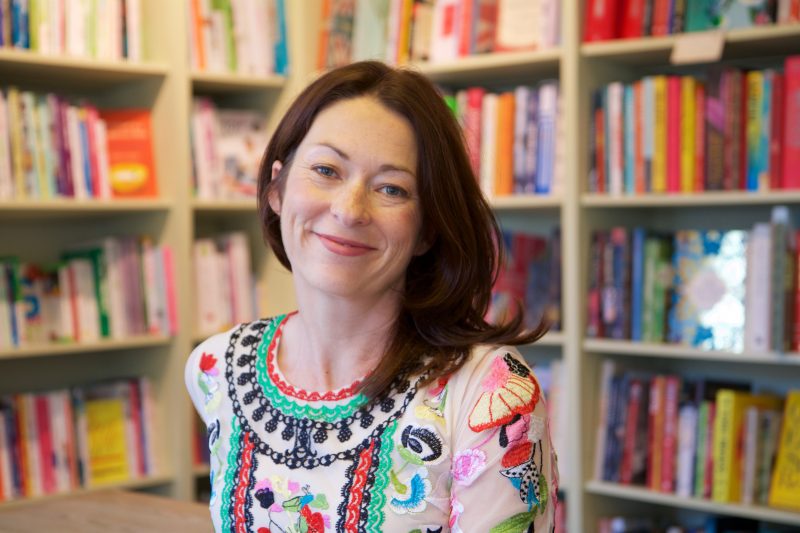 If you were able to jump into a book and hang out with any character, who would it be and why?

I would like to jump into a childhood favourite – Ballet Shoes by Noel Streatfeild  – and hang out with the Fossil sisters: Pauline, Petrova and Posy. As a child they had a huge impact on me (and made me desperately want to have sisters). Recently I read it to my 8 year old and it was great to see her resonating with a story written in 1936. I hadn’t read it for decades and it was wonderful to familiarise myself with it again. When I read out the final few pages – when Gum returns – I was sobbing so much I couldn’t get the words out, and my daughter was hugging me – and well, let’s just say it was a moment. Also I’d love to know what kind of women they grew up to be. That would be fascinating…

The local play park, a trampoline park, or giving your kids a cardboard box and some bubble wrap to play with at home?

Cardboard box and bubble wrap every time. My background is in theatre, so I love encouraging my kids to play creatively – to use their imagination. Besides, soft play jungles bring me out in a rash and hysterically anxious.

Maya Angelou. In a speech, she said, ‘I encourage you, with all my heart, to strive to be bigger. Stronger. Healthier. Dare. Dare. Dare.’ Nuff said, right?

‘Argue for your limitations and sure enough they’re yours.’ Richard Bach (via my dad).

You’re sitting on a park bench in the sun, with a bottle of fizz chilling and a few bags of Quavers. What 5 people (dead or alive) would you like to pop up to join you for a chat?

I don’t know how to bake a cake. Or cook anything really… (My culinary skills are similar to the Wendy Craig character in the seventies sitcom ‘Butterflies’ – atrocious).

Apart from being close to Kew Gardens, I love the accessibility of culture – especially dance and theatre. I love the Royal Opera House, Sadler’s Wells, and the South Bank. Recently my 8 year old performed with 600 children at the Royal Albert Hall – that kind of opportunity is hard to come by when you live out of town. It was such a moving night. My mum and I went through lots of tissues. 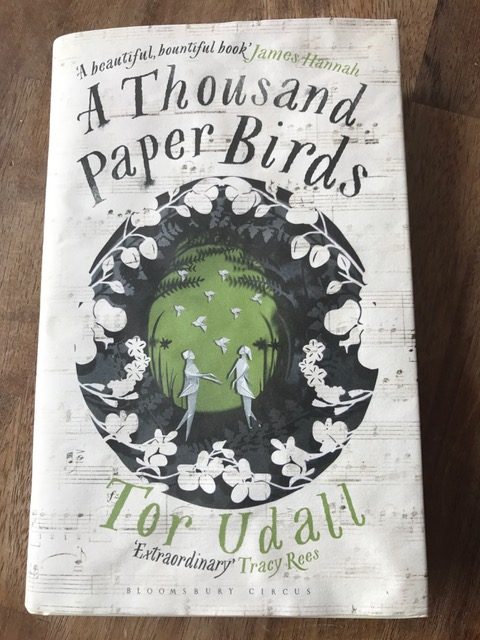