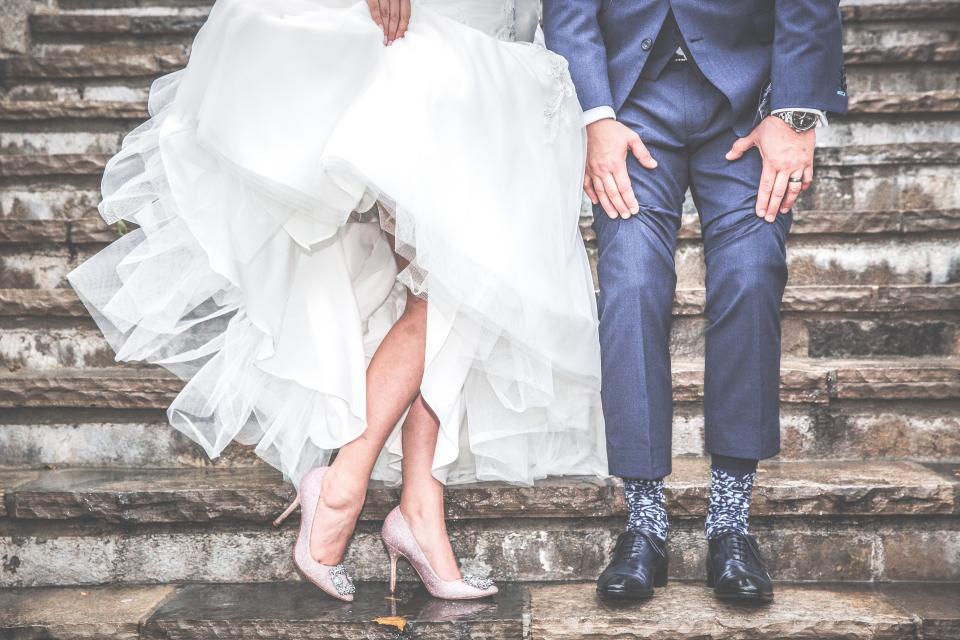 If you’re wondering how to tell if you’re a good wife or partner, then look no further – take the S.H.I.T. quiz.

Mr S.H.I.T. keeps making sexual innuendos in an annoying Sid James kind of way and texting you the ???? emoji.

He’s clearly after some action. You’re not exactly feeling very Barbara Windsory these days however, and prefer to get into your flannel pjs, eye mask on, ear plugs in and hit the hay by 9.35pm.

A) realise it’s been a while and the poor man has needs. You squeeze into that Agent Provocateur corset he bought you back in 2005, dim the lights (a lot), put some Barry White on and text him ???????? while you languish on the bed like a smouldering Alexis Colby, waiting for him to finish his tea and scamper up the stairs.

B) slightly reluctantly put down your Gardener’s World with a little sigh, turn to him in bed and say, ‘OK then Big Balls, show me what you’ve got, but make it quick so I can get back to Alan Titchmarsh telling me how to prune my bush.’

C) tell him to stop being so needy, it’s not a good look in a man his age. You’re far too exhausted to think about anything like that and if he really needs to get his end away, he should take a mistress à la Président Mitterand.

You go to the loo only to find the seat up (again) and lovely droplets of wee all over the bowl (with some even reaching the wall). Do you:

A) roll your eyes fondly, pop on your marigolds and give the loo seat (and wall) a quick wipe down. It must be so hard to correctly aim a willy of his size into the toilet bowl, you think to yourself. Nothing a quick spray of Dettol won’t sort out anyway.

B) humph a bit but after 14 years of nagging you’re resigned to the fact your husband’s toilet habits are never going to change and a bit of errant wee doesn’t really warrant a place on the worry list in this world of climate change and BoJo.

C) scream out loud ‘Why the F am I looking after a 45 year old toddler who’s not even toilet trained?’ Then proceed to throw the Dettol bottle at his head before screeching at him that if he leaves the toilet seat up ONE more time you will flush his head down it.

You’ve been out for a bit of much deserved me time on a Saturday afternoon but when you return things are not as they should be. The kids are feral after eating nothing but crisps and Starmix all day, the house looks like you’ve been burgled and you find Mr S.H.I.T. horizontal on the sofa watching football with a cold lager in hand.

A) decide not to disturb him. He’s had a tough week at work and deserves a little relaxation time. You refresh his lager supply, mop his brow and start to tackle the bomb site that was once your pristine home.

B) feel a little irritation that this is not quite the idyllic domestic scene you’d hoped to return to, but that cold lager looks good and you’d like to catch up on the footy scores too. So you grab a couple more Peroni from the fridge, plug the kids into their devices and cuddle up on the sofa with your man.

C) rant at Mr S for half an hour that you expected the kids to be bathed and fed and the house to be spotless, you don’t ask for much, he’s about as much use as Andrew Ridgeley was to George and you’re thinking of going off with the window cleaner who said you had a nice squeezy mop.

Mr S seems to be going through something of a mid life crisis and has purchased some new threads. He appears for a night out at the school fundraising quiz night in some very tight, three quarter length white jeans, slip on loafers (no socks), a fitted, white T-shirt and you can’t be sure, but he may even have had his eyebrows threaded.

A) say ‘Wow, you look (pause while you search for the best word)….trendy’ and smile with pride at how he is trying his best not to become an old fuddy duddy, while helping him to the front door as he seems to be having trouble walking.

B) stifle a giggle at the vision in tight, white clothing in front of you but decide he looks a little like that bloke in Dollar who you fancied circa 1987. And anyway, he was nice to you when you went through that phase of regularly trying to Kardashian-contour your face only to look like Michael Jackson (in Thriller).

C) burst out laughing and tell him there is no way you are going out with him looking like a middle aged, paunchy Anton from Love Island. He needs to get back upstairs and change into his usual, age appropriate jumper and chinos and snap out of this mid life whatever it is – or you’ll be off with that nice window cleaner.

You are a very loving, kind and supportive wife/partner. They say love is blind and in your eyes Mr S can do little wrong. Be careful however, not to become a doormat otherwise he may start to take the piss and treat you like a skiv, rather than the princess that you are.

You have a clear idea of what an equal marriage / partnership should be like and won’t take any crap, as well as reining yourself in when you’re in danger of dishing it out. You love Mr S.H.I.T. very much and want to have a laugh together, which you do. A lot.

Everything Mr S does irritates you intensely and you feel a strong resentment towards him breathing. You feel you may as well do everything yourself as he’s useless at most things and you tell him this every day. If you feel any love left at all for him, then perhaps counselling might be a good idea, or else just quit while you’re ahead and ask the window cleaner out on a date.