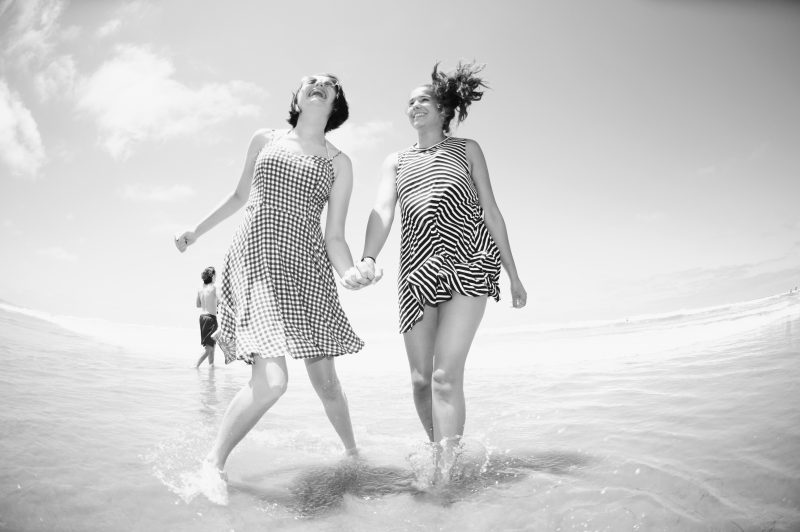 It all seemed such a wonderful idea back in February, on that cold bleak day when you got all over-friendly (making more effort was one of your New Year’s resolutions) and invited the new neighbours round for a cup of tea.

A bottle of gin and six feral kids later, and not only were you having a kitchen disco to Erasure’s Greatest Hits and random group hugs, somebody had come up with the genius idea of all going on holiday together.

Even though you & Mr S.H.I.T. have agreed that holiday time is sacred and going with another family is not really your thing, you find yourselves both high fiving your new besties, and excitedly googling hot sunny destinations.

So, it’s now holiday time and it’s fair to say you & Mr S are totally dreading it. But maybe holidaying with another family will be the best thing that ever happened to you…. here’s six reasons why it’s not.

You’ve just spent the past 45 minutes in the taxi to the airport trying to stop your kids Chinese burn each other’s arms off. And already it’s Mr S’s fault that you left your GBH straighteners on the bed. You need coffee and quiet time.

But you immediately bump into New Neighbour (NN) family at check-in. Your heart sinks. Everyone’s all fake smiles and holiday cheer and Mrs NN is dolled up to the nines looking like Victoria Beckham. You, on the other hand, are Vicky Pollard in your comfy flying tracksuit. Where is her comfy flying tracksuit? And why is she wearing make up and accessories at 8am?

Mr NN is now authoritatively telling the poor girl at check-in that his seats are not good enough and he wants them changed. He’s a complainer. Oh shit.

Thankfully you are a few rows back from the NN family, so out come the screens for the little S.H.I.T.s, and finally quiet time is yours.

As is customary, you and Mr S have not yet uttered one word to each other, just a few death stares. Travelling with the kids is never your most loved-up time.

Mr & Mrs NN pop along to your row to say hi, whilst holding hands. They then proceed to tell you that they didn’t bring the iPads as they don’t believe the kids should need them on holiday. Oh crap.

You arrive at the villa and everyone quickly realises there is one lovely double room with an ensuite, and one not so lovely room with a double bed which reminds you of your student days when you & Mr S shared a single. Except now you’re not 18 and drunk all the time, and lying in extremely close proximity to a snoring middle aged man is not appealing in the slightest.

You start a pleasant to-ing and fro-ing of ‘You have it’ ‘No, you have it’ ‘But you found the villa’ ‘No don’t be silly’ ‘But I’d feel so bad’ ‘But so would I’ until the dreaded ‘Oh, ok then, as long as you’re sure…’ and before you know it Mr & Mrs NN have plonked their bags on the lovely big double bed. You think you might cry.

The time has come to reveal the body that, let’s face it, isn’t exactly competing with the lithe toned bikini bods of the Made In Chelsea youths you torture yourself on Instagram with everyday, but it’s not bad. It’s borne you three kids and you’ve been working on it a little recently with the prospect of having to parade it in front of the NN family.

You nevertheless cover up in a floor length kaftan to make that first poolside entrance. You’re not quite ready for the big reveal on day one.

But what’s this? Mrs NN appears to be showing off a full six pack in her beautiful white bikini – it’s got to be a Melissa Odabash – and she’s bronzed up to the max. Why, oh why, didn’t you slap on some Skinny Tan last night on your milk bottle legs. She’s Melania to your Nicola (Sturgeon).

She dons a different Odabash bikini every single day. You catch Mr S on several occasions catching sneaky glimpses of her from behind his mirrored sunglasses. He thinks you can’t see and has no idea why you don’t speak to him for most of the week.

Very reluctantly you announce to the kids that the iPads are not coming out all week seeing as the NN kids have wholesome good parents who don’t allow them. There go your lie ins.

You expect a complete apocalypse but sure enough, the kids soon adapt to doing normal, child-like, fun activities and are happier without them. You make a pact with yourself that you will definitely, definitely only bring the iPads out for educational purposes in future.

The kids all get on really well and it’s actually far easier as they’re not bothering you every five minutes.

You’ve noticed, however, that Mr NN does not hold back from telling your kids off. Even when you’re there. Has he not heard of the utterly golden rule that you never, ever discipline other people’s kids when their own parents are present? End of.

Obviously you bitch and moan to Mr S about it every night in your tiny bed, but put up with it all week. The kids don’t seem to care.

You take it in turns to cook, but there are always those awkward ‘Can I do anything to help?’ moments when you tell the NN’s just to sit down and relax. Meanwhile on their cooking nights, they have you chopping cucumbers, tomatoes, peppers, setting the table…what did their last slave die of?

And why doesn’t Mrs NN eat thousands of crisps like you do everyday? Isn’t that what holidays are all about?

Mr S suggests one night, during one of your whispery rants, that maybe that’s why she’s got a six pack. He soon wishes he’d kept quiet.

But on the last evening before you head home, you look round the table basking in a warm fuzzy Sangria glow, and you realise that, all in all, it’s been good. The kids have had a ball, you’ve all got on pretty well and you find yourself letting out a loud high-pitched ‘whoop’ when Mr NN suggests you do it all again next year.

Your husband looks at you in absolute bewilderment having endured an hour of non-stop moaning about the whole thing every night in the privacy of your crap bedroom. But then the poor man doesn’t have a scooby what’s going on in the motherhead from one minute to the next, he should know that by now.

It’ll be great. Just need to get a personal trainer and get rid of that M&S cozzie, and you’ll be ready to go.

As always, this is totally tongue and cheek and I know lots of people who have fabulous holidays with fabulous friends every year, including ourselves. Enjoy!