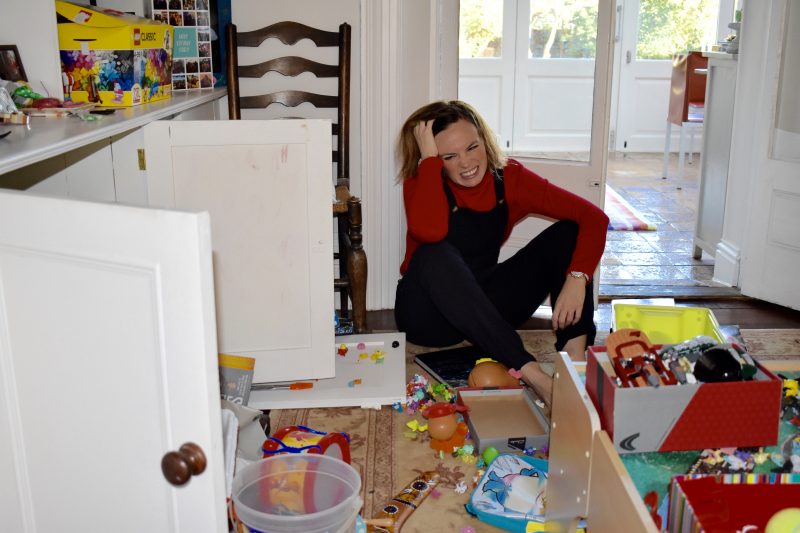 I guess I could describe myself as naturally quite messy. If you asked Granny S.H.I.T. who endured the teenage tornado bedroom, or any of my past flatmates, they would undoubtedly back this up, and most likely take away the ‘quite’.

I was known to use my floor as a wardrobe in one of the flats I lived in – it was just so much easier than hanging everything up. What’s not to love about being able to wade through a sea of clothes in your twenties, and just throw on whatever takes your fancy?

However, something happened during my first pregnancy and the nesting thing hit me big time.

Mr S.H.I.T. would regularly find me at 5am clearing out any and every drawer in our flat. Our filing system was second to none.

The box at the bottom of the wardrobe which hadn’t been opened since graduation was no more. I held no prisoners. Student clogs – gone. Pulp poster – gone. Now That’s What I Call Music tape collection – gone.

Mr S was, quite frankly, a little concerned but also delighted by this fanatically tidy woman in his life. Our lives were a newly streamlined zone and boy, it felt good.

Then the baby arrived and we realised that the minimalist clutter-free zone was under siege. Large bits of brightly covered plastic tat suddenly appeared in our living space. We had no storage space to speak of. There was no avoiding the overspill of baby paraphanalia into areas where we had, only weeks earlier, gazed into each other’s eyes over the very clear worktops.

The ‘baby’s room’ was a messy amalgamation of what had been our study and nappies, baby wipes, a changing mat, squeaky toys, and the all important cot squeezed into the corner.

It was time to move.

So we did. We found a house and excitedly asked each other how on earth we’d fill this bigger space with the few possessions we had.

Well, blow me down, it didn’t take us long to fill every nook and cranny with even more plastic tat, as two more babies arrived and with them, came more ‘stuff’.

The nesting thing didn’t appeal so much with pregnancy two or three. I was too knackered to care that if you dared open a cupboard you were at risk of being found a few days later under an avalanche of scooters, shoes, paint pots, jigsaws and a giant Iggle Piggle.

But as time has gone on, the growing amount of kid kit, neglected piles of paper and endless knick-knacks is causing me angst. My well-being has become a victim of what they call the “clutter effect.” My home is cluttered, therefore so is my mind.

We identify closely with our home environments, and when that’s a sh*tfest, it can naturally effect the experience we have in that space. Our homes should be a psychological comfort, not a constant feeling of lack of control, and that’s exactly what I’ve been feeling lately. Out. Of. Control.

So, what better time to tackle it than now. A pre-Christmas cleanse. A clearing of the decks to prepare for the ultimate chaos of the Christmas season, as well as giving away things that we really no longer need, to people who need them. We’re so fortunate to have too much stuff so let’s recycle and pass on to others.

The cupboard under the stairs has been the first challenge and my, it was a big one. Tennis rackets, frisbees, boots, a fishing rod… who knew? I questioned what on earth I was thinking as I started, but once underway, there was no stopping me. I was a woman possessed. And by jings, it was worth it. I just open that cupboard now purely to admire. The satisfaction is immense. Many other extra-curricular activities once gave me a high but now, all it takes is a tidy cupboard.

Even the bedroom chair has been cleared. You know THE CHAIR. The one that is never actually used to sit on, because it’s sole purpose is to hold piles of clothes. Clothes that need mending, because obviously in a spare moment you will not try to find Megan Markle on Instagram, you instead will sew that button back on. And the clothes that need dry cleaning and sit on the growing chair for three years because, let’s face it, taking that detour to the dry cleaners is just a step too far. But I’ve only gone and taken them.

And now Maison S.H.I.T is going to be a place of calm and organisation. No more out of control clutter. Until Boxing Day. I wonder how calm and cleansed I’ll be feeling by then.